How do we Treat Ankylosing Spondylitis?

Let's give you the information you need

There have been recent significant advances in the management of Ankylosing Spondylitis, predominantly with regards to the pharmacological treatments available. However, the most important aspect of management is commencing treatment as early as possible in the course of the disease, with the aim being to retard or prevent the natural history of the disease. This generally follows a chronic relapsing and remitting course, resulting in joint damage or fusion leading to an impairment of function. Early treatment is particularly important, since the large proportion of damage related to the disease occurs in the first ten years following the onset of the condition.

Treatment of AS is essentially divided into two groups, which are not mutually exclusive but rather are often used in conjunction with each other. These include non-pharmacological modalities, which is predominantly in the form of exercise, and pharmacological treatments, that traditionally has included anti-inflammatories with the recent addition of biological agents that specifically target the drivers of inflammation.

The major component of non-pharmacological therapy is exercise, which is a cornerstone of treatment of AS. This has been shown to reduce pain and stiffness, increase mobility and function, and have a positive effect on mood, attitude, health, and quality of life. In addition, a major aim of exercise is to slow the progression to ankylosis.  The evidence in the scientific literature supports the use of exercise that is based on strengthening, stretching, and aerobic fitness. This can be performed either individually or as part of a group exercise session.  A physiotherapist/physical therapist with experience in the management of AS is best placed to prescribe an exercise program that is most appropriate for each individual, which may include water based activity such as hydrotherapy or swimming. Land based exercises that include high impact, such as jumping and contact sport, should probably be avoided in the initial stages of treatment.

The pharmacological approach to managing the disease has predominantly focused on symptom control, and the first line therapy to achieve this aim in patients with AS has been the non-steroidal anti-inflammatory medications, termed NSAIDs. There are a large number of NSAIDs available, some of which can be purchased without prescription from the local pharmacy or supermarket. However, discussing the medication with your doctor is important prior to their use as there are a number of potential complications/harms that need to be considered.

Nevertheless, these medications have been shown to be quite effective in reducing the pain associated with the disease, allowing those affected to participate in the exercise program as described above. In fact, the response to NSAID therapy can in itself be a further clue to the diagnosis of an inflammatory spinal disease and can predict to some degree the likely course of the disease. Patients with AS have generally found that taking NSAIDs in the evening is most helpful in managing their nocturnal and early morning symptoms, which is usually the time of day that is most troublesome. Interestingly, there is a suggestion that NSAIDs, when used continuously rather than on-demand, may have an effect in reducing the radiological progression of the disease independent of its effect on the symptoms of the disease.

Oral coticosteroids have not demonstrated a significant long-term benefit in the management of AS and therefore has little role in management, particularly given the number of potential side effects associated with long-term use of the medication. However, corticosteroid injections can be useful in managing inflammation in the short term, especially for enthesitis, peripheral arthritis, and sacroiliitis. Steroids, though, do play a malor role in treating the potentially serious extra-articular manifestations, such as acute anterior uveitis where they are often given as topical therapy in the form of eye drops.

Disease Modifying Anti-Rheumatic Drugs (DMARDs) have been disappointing in the treatment of spinal inflammation. However, they do have a role in the treatment of peripheral arthritis that can occur with the disease and in other rheumatic diseases such as Rheumatoid arthritis. The most commonly used DMARDs in AS have been Salazopyrin and Methotrexate.

The most exciting recent advance in the treatment of AS and the related Spondyloarthritides has been the emergence of the TNF? inhibitors. TNF? is a chemical messenger (cytokine) that has been shown to be an important factor in driving the inflammation seen in these conditions. Medications have been developed that are able to specifically inhibit the action of this cytokine, and these medications are termed biological Disease Modifying Anti-Rheumatic Drugs (bDMARDs). Those currently licensed in Australia for use in AS include Infliximab (Remicade), Etanercept (Enbrel), Adalimumab (Humira), and Golimumab (Simponi). These are delivered via either an intravenous infusion or sub-cutaneous injection every 1, 2, 4, or 6 weeks depending on which medication is chosen.

These medications have proven very effective in managing most aspects of the disease, including many of the extra-articular manifestations of the disease such as uveitis. They have shown a positive effect on disease activity and function, with 50% of patients reporting a 50% improvement in a composite outcome measure. These are expensive medications and as such subsidised therapy is only available for those with severe AS that has not responded to NSAID therapy and exercise, where radiological evidence of sacroiliitis is present and the inflammatory markers are raised.

There are potential complications associated with the use of these medications, particularly infection, and as such prior to treatment patients are tested for the presence of past or current Tuberculosis and both Hepatitis B and C as well as HIV. Therefore, at present, Rheumatologists alone are permitted to prescribe these medications for the treatment of AS. 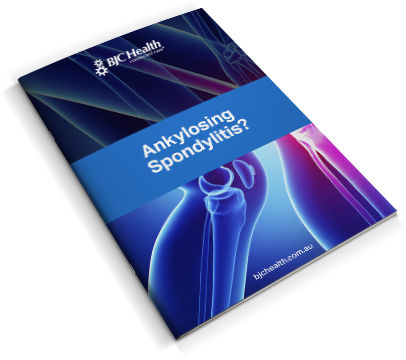