Gout is the only form of arthritis that's curable.

Gout is a very common inflammatory arthritis. It is a result of having too much uric acid in our circulation (hyperuricaemia).

When the ability to flush the uric acid from our kidneys is exceeded, that is saturated, then the blood levels of uric acid increase. It is similar to adding sugar into a glass of water until a point when it no longer dissolves and precipitates as granules.

The manner in which the body manages this situation is by forming crystals of uric acid, which are then deposited into our joints and skin. In some ways this can be considered as putting the excess uric acid into storage.

These crystals usually rest quietly in the joints, away from the attention of the immune system, during which they do not cause any pain or swelling.

However, a sudden fluctuation in the level of uric acid often alerts the immune system to the presence of the uric acid crystal in storage, resulting in a severe inflammatory reaction. This is termed an acute attack of gout, which manifests as swelling, heat, pain and tenderness at the joints involved.

The inflammation resulting from these attacks of Gout can be a very destructive process if not treated properly.

What Causes High Uric Acid Level?
UP NEXT 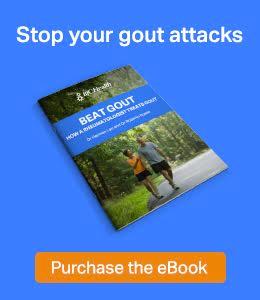 Get the help you deserve today.