Ankylosing Spondylitis (AS) is an inflammatory rheumatic condition that is one of a number of diseases that are characterised by inflammation of the spine termed Spondyloarthritis. The inflammation that occurs particularly affects the sites at which tendons or ligaments join onto bone. The most commonly affected region is the sacroiliac joints, which is where the spine joins onto the pelvis. However, any joint can be affected and, in addition, sites where tendons join onto bone are also commonly involved, such as the insertion of the Achilles tendon into the calcaneus (heel bone).  Furthermore, inflammation can occur at other organs in addition to the musculoskeletal system, such as at the eye, intestines, and lungs.

Ankylosing Spondylitis afflicts a small proportion of the population, estimated at about 0.5%, but is commonly under recognized in those suffering with back pain. Consequently, the average time to diagnosis can be quite long, which some have estimated to be as long as 5-7 years. The ability to diagnose this condition early continues to be a significant challenge despite the fact that the disease has been present in humans for thousands of years, as shown in the remains of three Egyptian pharaohs, and the first specific description of the disease being published in 1693. Therefore, a current focus in Ankylosing Spondylitis is how to identify those suffering with the condition at an earlier point in their disease course, at which time the condition is termed axial Spondyloarthitis.

Spondyloarthritis encompasses a group of conditions that share the common clinical manifestation of inflammatory back pain. These conditions include Ankylosing Spondylitis, Reactive Arthritis, Psoriatic Arthritis, and Enteropathic-associated arthritis. There are differences between these conditions that may not be evident early in the disease and only become apparent overtime. However, the emphasis in this early phase of the condition is to determine the presence of an inflammatory spinal disease, rather than differentiating between these specific conditions.

Ankylosing Spondylitis is the most common of the Spondyloarthritides. The condition is symptomatically more common in men, with the usual age of onset being in the 3rd and 4thdecades of life (average age at onset is 26 years). It is unusual for the disease to commence after the age of 50. Overall, Ankylosing Spondylitis is more common in the Caucasian population. There is a familial predisposition to the disease, whereby the risk of developing AS is increased if a first degree relative is affected, especially if HLA B27 (a genetically determined cellular marker) is present.

The consequence of the inflammation present within the spine and other musculoskeletal structures is subsequent uncontrolled increase in bone formation that results in stiffening and ultimately fusion of the joints. It is this process that gives the condition its name of Ankylos – Greek (Gr) for stiffening; Spondylos – vertebra (Gr); itis – inflammation (Gr). The fusion that occurs in the spine commonly causes the affected to have a stooped (flexed hip) posture, that ultimately has a significant impact upon their ability to look forward and walk.

What causes Ankylosing Spondylitis?
UP NEXT 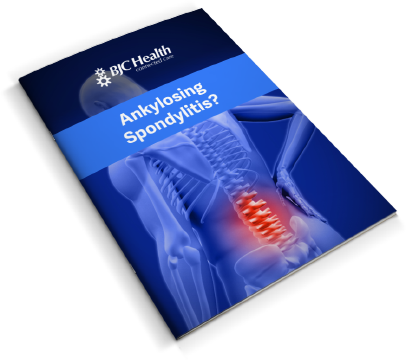