Whenever I’m going through the low FODMAP diet with someone for the first time, I always hope that their favourite veggies are on the ‘safe’ list. There are a few, however, that are in a grey area; where maybe a small portion is considered low FODMAP, or maybe, due to ongoing research, has moved from safe to unsafe, or vice versa. So which are the vegetables that I find clients are most confused about? 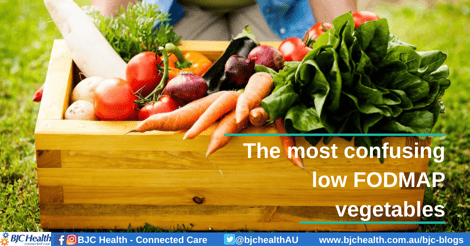 Surprisingly to most, these are actually low FODMAP, except for savoy cabbage. Due to the likelihood of gas production with these, the majority of people usually expect these to be on the ‘unsafe’ list. However, whilst you may find gas to be a problem, according to the Monash University Low FODMAP App, FODMAPs are not actually the culprit.

The white part of both of these comes in under the ‘unsafe’ list, however, the green portion, or the leaves are considered safe. So how green is green? I usually recommend to trim the ends, and just use the dark green part.

Similar to Brussels sprouts and cabbage, people often expect broccoli to be high in FODMAPs, however, with Broccoli, it all depends on portion size; if less than ¼ cup is used, it is deemed low FODMAP, more is considered moderate to high in FODMAP content.

Celery is similar, in that less than 5cm of a stalk is considered low, more is moderate to high. Up until recently, celery was found comfortably on the low FODMAP list!

If I had a dollar for every time someone said to me ‘but I’m using sweet potato because it is healthier’, there would be a fair chunk of money in the bank! Many people choose sweet potato due to it’s lower GI content than most white potato, however when it comes to FODMAPs, white potato is actually a better choice. In regards to pumpkin, Butternut (arguably the most popular) is moderate in FODMAP content, whilst the others are all safe.

Phew! No wonder people find this so confusing sometimes!

I’d love to hear if any of you have any other vegetables you find particularly confusing when following a low FODMAP diet!

Presence of FODMAPs is determined by current statements made in the Monash University Low FODMAP App.

Big thanks to our wonderful participants in the current 12 Week FODMAP Challenge who inspired this post!

What if the Low FODMAP diet isn't working?

4 tips for a low FODMAP Easter