The results of the EXXELERATE trial were presented by Dr Roy Fleishmann, and I share my notes today.

For the formal paper, please see this link (abstract).

It's an important trial because it represents a head-to-head study between 2 biologic agents. These tend to be rare.

It's also a big deal because it's the 1st time a TNF inhibitor (TNFi) has been compared head-to-head to another TNF inhibitor within a randomised controlled study design.

The set-up for this study:

EXXELERATE was a brave trial, with the objectives: 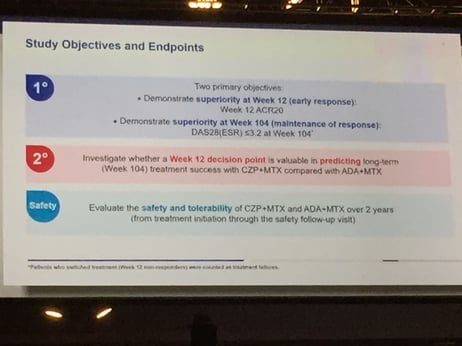 No difference in the measures that count.

In effectiveness: Certolizumab + MTX = Adalimumab + MTX at week 12 and after 2 years.

In safety: Certolizumab + MTX = Adalimumab + MTX over the 2 years.

While not the result the manufacturers responsible for the trial were hoping for, it's a useful result and an important one to add to our body of evidence.

What the study did show, for the 1st time, in a head-to-head study, was that those patients who were primary non-responders to a TNFi at week 12, could then be swapped to a 2nd TNFi with a response rate of about 60%.

EXXELERATE suggests that we could achieve similar results just swapping to another TNFi (until we develop more precise ways to help inform our use of medication).

What is your experience of this?

What to do about overwhelming fatigue in rheumatology?