Low back pain, how long does it last?

Have you ever had a bout of low back pain? Chances are that for up to 80% of you reading this, the answer is yes. The duration of which your low back pain may last is dependent on its cause - for which we categorise as either mechanical, or, ...

Recently I have been involved in the development of an education program for GPs regarding Rheumatoid Arthritis (RA) and one issue that had stimulated discussion was the data regarding extra-articular manifestations (EAMs).

In a bygone era, prior to the early use of Disease Modifying Anti-Rheumatic Drugs (DMARDs), EAMs were definitely more common. However, with the current approach of introducing DMARD therapy early there has seen a reduction in the frequency of these consequent conditions.

These include entities such as scleritis (inflammation of the lining of the eye), pleuritis (inflammation of the lining of the lungs), and Felty’s syndrome (a combination of RA, enlargement of the spleen, and a reduction in the number of neurtrophils, a specific type of white blood cell important in immune defence). Nevertheless, we Rheumatologists continue to ask our RA patients for any symptoms that may indicate the presence of these conditions. 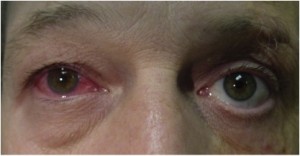 Therefore, it was with interest that I read a recent article on the epidemiology of EAMs in another common rheumatic disease, Ankyolising Spondylitis (AS).

AS is a chronic inflammatory disease with an estimated prevalence in western populations of about 0.6%. It is characterized by inflammation of the spine and not infrequently of peripheral joints; however, multiple other organ systems can become affected by the disease process.

The most common sites include the eye, bowel, and skin. At these sites the disease manifests as acute anterior uveitis (AAU), inflammatory bowel disease (IBD), and psoriasis. The presence of these EAMs is of relevance because they impact upon the patient’s quality of life and upon our treatment decision. 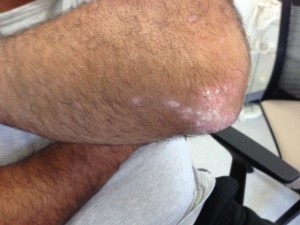 Psoriasis on the elbow

1. AS patients were 2 to 20 times more likely to develop these diseases compared to the normal population

2. A significant proportion of these EAMs were present prior to the date of AS diagnosis

3. The likelihood of developing an EAM continued over time, such that 20 year cumulative risk increased to

4. The risk of developing an EAM was highest in the 1st year after diagnosis of AS

In difference to RA, the findings of this recent study suggest that the incidence and prevalence of these common EAMs in AS has remained stable when compared to previous cohorts.

A possible explanation for this may be that the time to diagnosis of AS remains prolonged in comparison to RA and there continues to be a delay in the time to commencing treatments that may alter the natural history of the disease.

However, interestingly, the prevalence of these EAMs is seen to a similar degree in those who have non-radiographic axial spondyloarthritis (ie. in those where spondylitis is present without evidence of radiographic joint damage), suggesting that in a proportion of patients with inflammatory spinal disease the phenotype includes inflammation at those target tissues.

This relatively high frequency of EAMs can actually be of clinical relevance in the diagnosis of inflammatory spinal diseases in those presenting with chronic low back pain.

It is common practice for Rheumatologists to enquire for symptoms of these EAMs, whereby a history of AAU is strongly suspicious for SpA in those with chronic back pain (Likelihood ratio (LR) of 13.9).

The presence of psoriasis and IBD in those with chronic low back is also suggestive of SpA, albeit to a lesser degree (LR of 3.8 and 4.3 respectively).

Finally, the results of the study also remind us to continue to vigilantly observe for the development of these conditions in those with an established diagnosis.

For any health professionals reading, I wonder if you have ever been prompted to consider an inflammatory spinal disease in a patient you’ve been treating for chronic low back pain on the basis of one of the conditions discussed above?

We're impotent with this deforming arthritis