Prednisone as a cause of Back Pain

MRI thoracic spine (sagittal)   By Dr Irwin Lim, Rheumatologist Rheumatologists all use Prednisone, an oral corticosteroid. In fact, we use steroid in all forms, and while it’s a 2-edged sword, this old drug remains a crucial weapon in our therapeutic ... 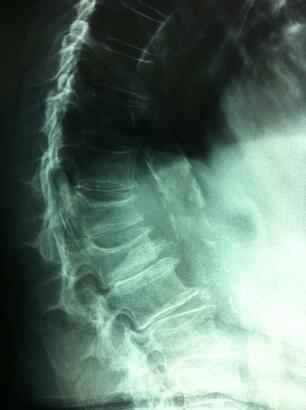 The bisphosphonates are a class of anti-osteoporosis medications which have been around for a couple of decades. Common brand names include Fosamax (Alendronate), Actonel (Risedronate) and Aclasta (Zoledronate).

They are effective and seem to also reduce the risk of death, over and above the reduction in osteoporotic fractures (see link).

But, in recent times, their use has been tainted by associations with 2 particular problems:

These are rare complications which seem to occur after prolonged use. Expert consensus is that the benefit of using these medications far outweighs these unusual and uncommon complications.

Still, you'd want to minimise the risk, wouldn't you? As would I.

One benefit of the bisphosphonate group of medications is that the good effect on bones seem to be prolonged, and last for some variable period of time even after the medication is no longer being used.

Let's look at the 2 best trials.

The FLEX study (reference) involved following up patients who had already been treated with Alendronate for 5 years. After this initial 5 years, half the patients stopped taking the medication. The other half continued.

At the end of the 10 years, the group which had stopped the medication in the last 5 years, did see their bone density slowly drift back down (ie losing bone) to the baseline at Yr 0. In addition, there was a statistically significant but small increase in clinical spinal fractures in this group.

The HORIZON Extension trial (reference) followed up patients who had already been treated with Zolendronate, intravenously once yearly, for 3 yrs. After this initial 3 years, half the patients were not given any further infusions. The other half had another 3 once yearly infusions. Total of 3 vs 6.

To stop or not to stop? The bottom line? (read this editorial)

Depends. This is what I'd do in general (but note that a patient's specific circumstances may change this):

Otherwise, there is an argument that can be made in stopping the drug and watching and monitoring the disease.

At some later time, when required, the medication can be reintroduced.

What's your experience with this? And, to my doctor readers, are you someone who does consider stopping?

The Rheumatology team at #EULAR2013