Rheumatoid arthritis is the most common form of inflammatory arthritis.

Luckily, the past decade has brought on a wealth of innovation in arthritis therapies. Many of which have been able to dramatically improve symptoms in patients suffering from rheumatoid arthritis.

Some have even been able to lower symptoms to such an extent that patients enter remission or at least, the medications reduce the activity of the rheumatoid arthritis to a low level.

These advancements, of course, don’t come without their challenges.

Here, we’ll discuss the main classifications of rheumatoid arthritis drugs, the past decade of innovation in treatments, and what this means going forward for patients suffering from arthritis.

With the exponential growth in medicine and technology, we’ve come a long way from the older techniques of bloodletting and gold therapy, especially in the last 20 years.

There are 2 main types of rheumatoid arthritis medications, the anti-inflammatories, and the DMARDs.

The classes of medication are the non-steroidal anti-inflammatory drugs (NSAIDs), cyclooxygenase-2 (Cox- 2) inhibitors and corticosteroids.

These anti-inflammatory drugs can reduce symptoms fast, usually within just a few days of use. As symptoms reduce, your doctor will usually try and taper off the use of NSAIDs and COX-2 inhibitors. This is because of a long list of undesirable side effects that can result when you use them for long periods of time.

These drugs are effective in controlling symptoms but won’t necessarily prevent the destruction of joint tissue, which is a major goal of therapy and something we want to slow down as much as possible.

This medication is similar to Aspirin and the NSAIDs but it is more specific in inhibiting the Cox-2 enzyme. This leads to fewer gastrointestinal tract side effect..

Corticosteroids mimic hormones in our body produced by the adrenal glands. These hormones signal the immune system to turn down inflammatory processes. Depending on the patient, a doctor might prescribe either an oral tablet or give injections. Oral tablets are easier, but the injections can work faster on localised areas and can avoid side effects which can potentially occur with the oral formulation..

There are a few different options a rheumatologist may choose:

Each of these medications has their own benefits and side effects. All of them will require close monitoring by a doctor to make sure they’re working as intended.

Side effects of DMARDs may include:

Only 30-50% of patients are treated with just one of these medications. More commonly, their doctor will need to prescribe a combination using a number of different DMARDs in order to get optimal pain relief.

Very few rheumatologists would be using Azathioprine, Gold or Cyclosporin for RA these days given the poorer risk and benefit balance of these medications and the fact that there are better alternatives.

Methotrexate is a synthetic compound that belongs to a class of drugs known as antimetabolites. It’s the most common DMARD used in the treatment of rheumatoid arthritis, and most doctors will use this as the first line of treatment.

They then build treatment plans from there, adding or changing medications as needed.

Methotrexate works by interfering with the growth and function of the cells that are causing inflammation in the joint. It has been used in chemotherapy treatments, however, the low dosage used in treating arthritis is too low to be considered chemotherapy.

In low doses, it’s considered safe and effective. It’s been used regularly for rheumatoid arthritis treatments since the 1980s.

For the past 20 years, a number of other, more sophisticated medications have been made to target specific parts of the immune system. These drugs are referred to as the biologic DMARDs.

They’re engineered within biologically-active cell systems to have highly specific effects on the body’s immune receptors and the cytokines, chemicals which act as messengers between various immune cells..

If combination therapy with the conventional oral DMARDs does not provide sufficient control of the disease, biologic DMARDs will need to be considered.

Biologic DMARDs (ie Humira, Enbrel, Remicade, Simponi, Cimzia, Orencia, Actemra and Mabthera) are more powerful immunosuppressants and are given as either subcutaneous injections or regular infusions through veins.

They’re highly effective in lowering the symptoms, the joint damage and deformity involved with rheumatoid arthritis.

In the last couple of years, powerful oral medications have been developed to work within the immune cells. They are distinct from the biologic DMARD medications in how they work and with the fact that they are taken orally rather than as injections.

These medications have been developed to work within the immune cells, to in- hibit proteins called kinases, to then disrupt the cell-signalling processes which lead to the inflammatory and immune responses seen in RA.

Examples include the JAK-inhibitors, Xeljanz (Tofacitinib) and Olumiant (Baricitinib).

Biosimilar medications are increasingly entering the market. These are medications which have been reverse engineered to be a “biosimilar” version of the original biologic DMARD. Due to complexity of process, it is not possible to create an identical compound to date.

These medications then go through a series of tests and trials, to prove their safety and their “similarity” to the original medication in some of the clinical settings that the biologic DMARD medications are used in.

The big hope is that this extra competition will lead to cost savings.

The Modern Era Of Rheumatoid Treatments

With the new group of biologic and targeted synthetic DMARDs available, few rheumatologists will linger on the older generation drugs once it is clear remission or at least, a very low level of disease activity, cannot be attained using these conventional DMARDs .

How active and destructive rheumatoid arthritis may be can be different in different people, and therefore, the approach a doctor will take can vary a lot from one patient to the next.

Most rheumatologists will start with Methotrexate, the most common DMARD used in rheumatoid arthritis.

From here, the doctor would assess any changes, and either add to or change the medication accordingly until they achieve their goals, with the goals ideally agreed to by both patient and doctor. With the various tiers of rheumatoid treatment options, there’s always another drug to try if something isn’t working.

Since 2004, people with RA in Australia have had good access to biologic DMARD medications, with the costs heavily subsidised by our government.

This has clearly helped rheumatologists achieve better outcomes for people with the disease who have not been doing well enough on the conventional DMARDs.

The problem is the high monetary costs of these agents.

While it’s unsavoury for some to have to compromise on treatment due to cost, this is an increasing reality given the limited health dollar in all nations.

Strategies to use these high cost, highly effective medications in the most efficient and cost-effective manner are needed.

The future is exciting. And confusing.

It’s fair to say that we are getting a whole new range of medications to use in RA and that over time, the specialised medications should become more affordable.

We are still however learning how to use what we have more sensibly.

The holy grail is to be able to use the right drug in the right person at the right time.

BJC Health remains on the cutting edge of these advancements, and we’re looking forward to applying the next generation of treatments to help improve the lives of our patients living with rheumatoid arthritis. 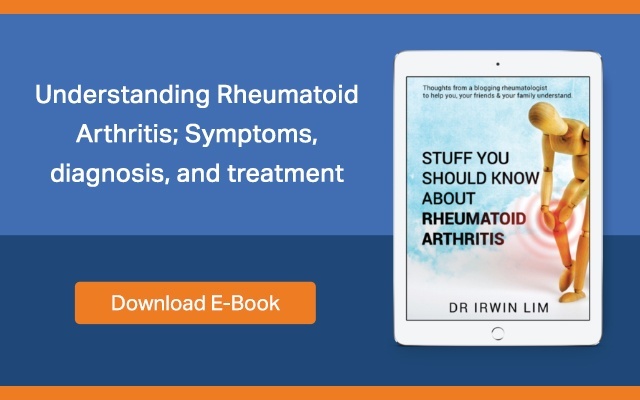 Rheumatoid Arthritis Flare Ups and How to Manage Them