Mr S underwent hip replacement for his osteoarthritis around 2010. He thought the result OK.  It did reduce the discomfort. In the last couple of years, he has noted more hip pain and now needs to mobilises with a push frame. Despite the difficulty with ... 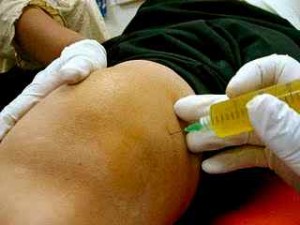 If you develop a swollen knee, please don’t consider it a normal occurrence.

If there was a clear cause, such as a fall to the knee, or some twisting injury to the knee, it’s likely that the cause is due to some mechanical damage. An easily recognised example would be a football or rugby player sustaining such an injury on the playing field. In that case, its typically serious and when the sportsperson develops an acute swollen knee after a popping or tearing sensation, it’s usually a tear of a major ligament such as the anterior cruciate ligament.

Most of the patients I see do not develop their swollen knees on a sporting arena.

Why is the knee swollen?

In the absence of obvious trauma, we need to work out if the cause of the swelling (effusion is the medical word for increased fluid within the actual joint) is due to degenerative/mechanical causes, or to inflammatory causes.

Degenerative/mechanical causes would typically be due to wearing out of the cartilage as in osteoarthritis, or tears in the menisci (think of these as the knee’s shock absorbers) or any combination of ligament, bone, and cartilage degeneration.

Inflammatory causes include crystal arthritis such as gout, septic arthritis due to various infections, and diseases of the immune system such as rheumatoid arthritis.

The story the patient provides and the clinical examination of the knee will typically give clues as to the cause.

Often investigations are needed. These may include a number of radiological investigations, sometimes including an MRI of the knee. If an inflammatory arthritis is suspected, blood tests are often useful.

One of the most neglected investigations, because it is time-consuming and because of a general lack of technical skill in performing it, is an aspiration of the swelling/effusion. By this, I mean, that a needle is guided into the knee joint to obtain a sample of the joint fluid. If there is a swelling/effusion obviously present, this is a simple procedure for rheumatologists.

This joint fluid, being precious and useful, can then be sent for further analysis. Infection can be excluded. Crystal arthritis can be diagnosed on microscopic examination. The constitution of cells within the fluid will allow us to also differentiate between degenerative/mechanical and inflammatory causes.

Once a clear diagnosis is made, treatment can be planned.

Physio by the Beach: Volleyball

Connected Care for my wife, kids and ME!