Asked to see a Physio for a Metrology Assessment? Here's what to expect.

If you have recently been diagnosed with Ankylosing Spondylitis (AS) or a Spondyloarthropathy (SpA), some Rheumatologists might look to refer you to a physiotherapist. You may be wondering why you are asked to see the physiotherapist before your next ...

Steve presented like many Plantar Fasciitis patients that I have seen.


Frustrated, annoyed and pretty fed up.


He had become increasingly frustrated with his pain and was beginning to lose hope of ever finding a solution.


Steve had experienced 12 months of worsening heel pain which started after he took up running. 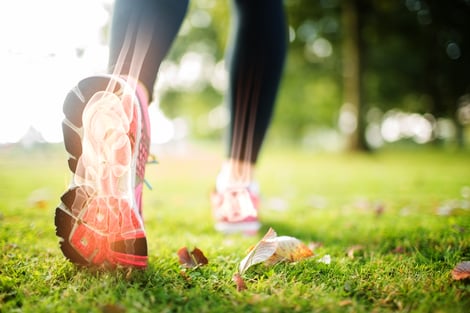 He had completed around half a dozen runs and stopped due to discomfort in both his heels on the sole of the foot and even up into his Achilles tendon. This was enough to start a very tough year for Steve!


So what had he tried?


Since his heel pain had started, Steve had thankfully been able to switch to wearing his more comfortable running shoes to work which had provided some relief. He had also visited a local podiatrist who had given him some orthotics, used massage on Steve’s calf and also gave him some simple stretches. And whilst these treatments had helped somewhat with Steve’s heel pain, his first steps in the morning or after he had been sitting for an extended period were still pretty uncomfortable.


He had tried doing some cycling at the gym and had stayed away from running. He was told by many that he had done what he could and that it would simply go away… but it hadn’t!


Steve came into our clinic after being referred to one of our Rheumatologists. He was fed up and unsure about what his next steps should be. It turns out that Steve had a long history of joint issues and his father had a history of both psoriasis and arthritis. As a result, our Rheumatologist performed some further investigations- including blood tests and an ultrasound on his Plantar Fascia.


Our Rheumatologist identified the potential for an underlying inflammatory condition based on Steve’s history and test results. The appropriate medications were started whilst he was also referred to myself for physiotherapy management in order to address the movement and loading aspects of his problem.


Thankfully Steve is now on the road to full recovery and I am working closely with his Rheumatologist to make sure we get him back to running safely.


Have you been able to pick up some of the clues from Steve’s story as to why his condition hadn’t improved? Read below to discover some of the potential reasons as to why this condition seems to stick much longer than its welcome!

Contrary to what a google search will reveal, not all persistent heel pain is plantar fasciitis! As we have found with Steve’s story, there are other conditions that might delay one’s recovery from Plantar Fasciitis. In this case, the diagnosis in question is Psoriatic Arthritis, but this could also be said for Ankylosing Spondylitis, Rheumatoid Arthritis and other forms of inflammatory disease. For Steve, his other joint symptoms and his fathers history of arthritis and psoriasis were enough for our Rheumatologist to start investigating further. Other clues would include the presence of back or buttocks pain, eye inflammation (e.g. uveitis, iritis), Gastro-intestinal issues (e.g. Crohn's disease and ulcerative colitis) or swollen/ inflamed joints. There are also other metabolic or endocrine disorders or even certain drugs which can impact on both diagnosis and recovery. As a Physiotherapist, I also need to consider whether someone’s heel pain is referred from the nerves in the lower back or legs. Other clues to help work this out are seemingly related back pain, changes to sensation (like pins and needles or  numbness) or the type of pain itself.

The Plantar Fascia and most other tendons are very responsive to changes in load. When I say changes in load, this could refer to any activity or position which loads the tissue. For the Plantar Fascia this involves activities such as standing, walking, running or playing sport. If the loading is above the level that the tissue can tolerate, then we will be unlikely to improve or change someone's pain. In Steve’s case, the time spent on his feet in less than ideal shoes was continuing to aggravate his injury.


A skilled physiotherapist will help you break down your activities and make the necessary changes to ensure the loading is not more than what the tissue can handle. Tools such as orthotics, taping, massage, dry needling, acupuncture or even a walker boot might be used to further offload the area. In order to help Steve’s progress further, we needed to decrease the time on his feet. We also used taping to provide further support to his feet and made sure he was wearing his more comfortable shoes as much as possible, even when at home.


A progressive exercise program is needed

Decreasing or modifying activity, although an essential component to managing Plantar Fasciitis, is not enough to allow for a full recovery by itself. In Steve’s case, we also needed to start a specific exercise program that would help strengthen his tissues to cope with running again. The program of a few basic calf raises and stretches would not be adequate or progressive enough to allow Steve to get back to his desired activities.


In our physiotherapy sessions, we started with prolonged heel raise holds (standing on your tip for 30-45 seconds) and then worked up to slow and controlled heel raises. We are now using weights and doing the exercise on one leg, but this has taken Steve months to build up to! We still have some steps to go to get Steve ready for running a fun run, but overall he is now experiencing no pain throughout the day and his initial first steps in the morning are much more enjoyable.


So don’t despair if your Plantar Fasciitis is taking some time to recover. It's a complex condition, which can be affected by load, footwear, biomechanics and more. Speak to you GP or physiotherapist if you are worried about your recovery.


And as always we are here to help.


Comment below or contact us if you can relate to Steve’s story or want to know more!

Getting sick..Should you keep up your exercise?